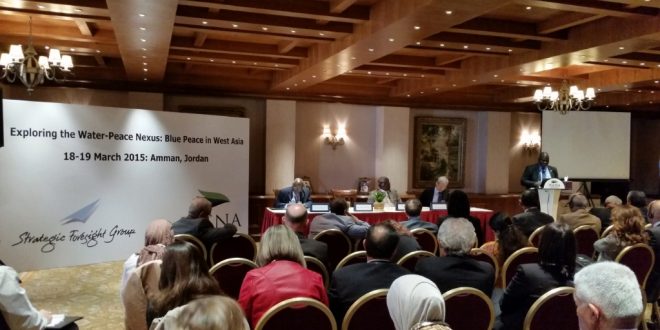 About 100 policy makers, Members of Parliament, serving and former Ministers, media leaders, academics, and water experts from across the Middle East and the representatives of successful trans boundary water cooperation institutions from Africa participated in the International Conference on ‘Exploring the Water-Peace Nexus: Blue Peace in West Asia’ held in Amman, Jordan on 18-19 March, 2015. The participants strongly emphasized high level political commitment to regional cooperation and joint management of trans boundary water resources as a prerequisite for sustainable peace-building in the region.

The conference was co-hosted by the Strategic Foresight Group and the West Asia North Africa Institute in partnership with the Swedish International Development Cooperation Agency and in cooperation with the Swiss Agency for Development and Cooperation and GIZ.

HRH Prince Hassan Bin Talal called for policy-makers to develop inter-state strategies with a human dignity focused approach, so as to improve water security for the people of – and countries in – the West Asia and North Africa region, at a water security conference.

HRH, the WANA Institute Chairman reiterated the call for “West Asian-North African cooperation and dialogue on water, energy, and the human environment. Only through nexus thinking, can we imagine a region fit for future generations.”

Ambassador Helena Reitz emphasized the importance of transboundary water cooperation to strengthen the relationship between riparian states and be a strong driver for peace. She underlined the growing vulnerability of women and children due to the on-going crisis in the region and stressed that it should be given the highest priority. She pointed out the need to pay heed to gender issues while tackling the water concerns as water is used for different purposes by men and women.

research that links the prevention of water conﬂicts and the sustainable, comprehensive and integrated management of water resources. Strategic Foresight Group has also facilitated talks between governments in the West Asian countries on resolving water conﬂicts and created a Blue Peace High Level Forum of Parliamentarians, Policy Makers, Opinion Makers, and experts.

HRH Prince Hassan bin Talal of Jordan is the Chairman of the High Level Forum. This work sits in complement to the WANA institute’s research on the nexus approach to resource scarcity and the intersection between water, food and hard security. The broader goal of both projects is to promote peace and security through a proactive process of regional water cooperation,

Hydro-Insecure – Crisis of Survival in the middle East. SFG

Water vulnerability relates to a population’s resilience to water-related disasters occurring in combination with existing poverty, unemployment, displacement, drought and female disempowerment. ‘Hydro-insecurity’ considers such vulnerability, in the context of water availability and supply and well as other hydro-dynamics. These Include man-made and natural disasters,

drought, violent conﬂict, unsustainable use of ground water and gender inequality. More than 40 million people in Iraq, Jordan, Lebanon, Syria and Turkey are highly insecure in terms of their effective access to water. This report places the hydro-secure In 30 governorates across 5 countries, 13 of which share borders. Refugees and internally displaced persons, and their host communities, are particularly vulnerable. The report highlights that violence and water shortages are two principal drivers of displacement. and advocates for the prioritization of regional strategies to respond to the needs of the hydro-insecure.

Water and Violence — Crisis of Survival in the middle East. SFG

This paper examines the problem of populations made vulnerable by the abuse of water as a weapon or target in violent conﬂicts. in the West Asia region, both State agencies and non-state armed actors have destroyed water infrastructure; since 2014, ISlS has demonstrated in Iraq and Syria how water resources and infrastructure can be used to achieve illegitimate objectives. The ramifications include death and disease, loss of livelihoods, displacement, and compromised sustainable development.

In the West Asia-North Africa region, up to 85% of water use is attributed to the agricultural sector. ‘Nexus’ frameworks stress the necessity of inter-sectoral approaches to efficient resource management in order to ensure food and water security. Refugee movements are both driven by and intensify water and food insecurity, with stressors initiating and impacts occurring in different countries. This paper conceptualizes regional linkages involving water and food security-related drivers, and the impacts on internal displacement and refugee movements. It aims to promote discussion and understanding on the need for cooperation between countries over the water, agriculture and food trade sectors.

The conference provided a platform for experts from Africa to share their experiences in successful trans boundary water cooperation with the participants from the Middle East. These included representatives of the Senegal River Basin Commission (OMVS), Nile Basin Initiative (NBI) and the Intergovernmental Authority on Development, Kenya (IGAD).

A new American research indicates that the war might arise in Middle East and south of Asia because of water by 2040. The boundaried-countries in these regions have a remarkable fighting history about controlling water resources. For example, the conflict between Syria with Iraq and Turkey where these two Arab countries claim that Turkey tries to control the Dijla river which comes from Turkey then pass through Syria and Iraq. As same as, the recent political crisis between Egypt and Ethiopia because of the huge dam that Ethiopia builds which will negatively impact on the Nile river in Egypt causing kind of dryness for the Egyptian cultivation lands and also a problem in producing electricity where Egypt relies on Nile to produce the power. Also, how Israel contaminates the water of Lebanese Litany river and the Jordan river.

This is one side of water’s problem. Water might be used as a weapon in struggling phase in the future. Because of that, the Blue Peace initiative has been announced to help the neighbor countries which share the same resources of water to find a way to manage that resources by consensus.

Yemen is familiar with using water as a weapon in wars and conflicts and the Yemenis still remember how the militias, which involved in fighting in the beginning of 80’s, had poisoned tanks of water in some villages. Despite the blue peace initiative considered only about how to manage a shared resources of water among countries, we have faced other darkness side of water problem here in Yemen. It is the shortage and pollution.  Unfortunately,  this is the problem that we face here, in Yemen. The level of underground reservoir of water in Sanaa goes down and down year by year and Sanaa has been threatened to be the first capital city in the world faces crisis of dryness. Besides, a science researches made by government and some other related organizations say this reservoir is contaminated. This is not the end of the crisis. Despite the shortage of water in Yemen, more than 80%of water used to irrigate the farms of Qat. Qat is a harmful plant classified as a kind of drugs in many countries,  Yemen is not one of them.

Sanaa now is the capital city of the country, probably not for long time in the future. Who knows? Maybe the history repeats itself and the Yemeni people will migrate and leave their land seeking for water exactly as what their ancient nation did after destruction of Marib dam thousands of years ago.